Eostre as an Eastern Kentish Goddess?

Last month was the Anglo-Saxon Hredmonath, Hreda’s month according to Bede’s De Temporum Ratione. Now, we are in Eosturmonath, Eostre’s month. River Devora has recently written about Hreda and Eostre at Polytheist.com, including about Hreda’s possible associations with the Gothic tribes.

If Hreda has potential etymological links to the Goths, what of Eostre? In Pagan Goddesses in the Early Germanic World: Eostre, Hreda and the Cult of the Matrons, Philip Shaw argues that she may have been a goddess closely linked to the Anglo-Saxons of Eastry, Kent.

Of Eosturmonath and Eostre, Bede writes:

Eosturmonath, which now is translated Paschal month, had its name from a goddess of theirs called Eostre, and they celebrated festivals for her in that month, by whose name they now call Paschal season; calling the joys of the new festival by the customary name of the ancient observance.

Though Eostre’s name is related to the modern English word “east,” Shaw casts significant doubts on Jacob Grimm’s popular 1882 hypothesis of a pan-Germanic dawn goddess *Ostara/Eástre, citing “lack of evidence for uses of ‘east’ and its relatives and derivates as words for ‘dawn’ or ‘Spring’ in the Germanic languages” (61).

Early forms of “Eastry” demonstrating /o/ as the original vowel of the second syllable include Eastrgena (788 CE); Eastrege, Eostorege, Eosterege, Eosterge (811); Eastorege (805-832) and Eastræge (825-832). Eastry’s antiquity as a place-name is reinforced by the *gē element, meaning “district,” which became obsolete early on in Old English (67).

Eastry appears to have been the name of one of the four regions forming the original center of the Kentish kingdom. Sturry and Lyminge are also Eastern Kentish place-names with the *gē element, and early Anglo-Saxon burials have been found at all three sites. Eastry was a royal estate, and the site of an early Anglo-Saxon church, and it has been theorized that Eastry, Sturry and Lyminge were all early royal capitals of the kingdom of Kent.

Shaw notes that “Bede’s <eo> spelling of Eostre is likely to reflect his use of a written source from outside his own locality — but it does not allow us to pin down the origins of this source with any precision” (65). Nonetheless, there is evidence that Bede received sources for the Historia Ecclesiastica from Kent, making it possible that he had relied upon similar sources in the earlier De Temporum Ratione. 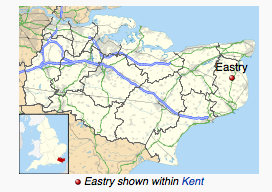 There is some doubt raised for Bede’s use of Kentish source by the appearance of the month-name rugern in the laws of Wihtræd of Kent (690-725 CE), which is not found in Bede, but Shaw considers it “quite possible that rugern represents a western Kentish usage, whereas Eostre, if Bede received his month-list form Canterbury, would be an eastern Kentish form” (66). Eastry, of course, is also in eastern Kent, as shown by the map above.

Because of the prominence of Grimm’s theory that Eostre was a dawn goddess and Helm’s theory that she was Spring goddess as well as the popularity of “function models” of polytheism in general, Shaw advocates for wariness around function models and argues that in the case of Eostre, “the etymological connections of her name suggest that her worshipers saw her geographical and social relationship with them as more central than any functions she may have had” (71). Such an approach also downplays the need to find pan-Germanic parallels by focusing on the importance of local and tribal deities…which ironically was something shared by different Germanic-speaking groups (and many non-Germanic-speaking peoples as well).